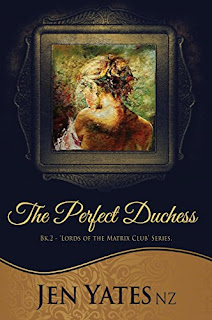 www.amazon.com/dp/B01MSBW42C
Book 2. in The Lords of the Matrix Club' series.
Romance set in Regency era - sexy to the point of erotica - at times.
AVAILABLE FOR PRE-ORDER NOW! Goes Live on Feb. 15th.
'The Perfect Duchess' Bk.2. in the 'Lords of the Matrix Club' series is ready for pre-order now.
'As a third son Dominic Beresford should not have been the next Duke of Wolverton, but like it or not, he’s inherited the titles and the estates, and the pressing obligations to find a wife and provide a ducal heir. His first choice of Duchess recently married his best friend so now he seeks marriage with the next most suitable candidate, longtime family friend, Lady Sherida Dearing. He has also been commissioned to locate a missing heiress as a favor to his erstwhile commander, a woman with a birthmark one cannot ask to see in polite circles.
Lady Sherida Dearing would make the perfect Duchess. She is exquisitely fair, icily regal and with an unfashionable tendency to wear high-necked gowns, she’s been dubbed the ‘Heavenly Iceberg’. Only Sheri’s maid knows the depth of her sinful imperfections and although Sheri has loved Dom since her first ball, can she marry him and keep her heart intact—and her secrets?
What the Duke of Wolverton hasn’t envisioned is exposing his own secret life as the Master of Virgins at the Matrix Club. Or that beneath the icy façade of his wife he will discover that one who will cause him to forsake all others; that one who is indelibly marked for the Duke of Wolverton—that one he’s been searching for.'
​ 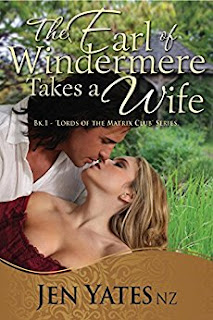 www.amazon.com/dp/B01ENSMA2A
Here is Bk.1. 'The Earl of Windermere Takes a Wife' FREE for 5 days only - from 1st Feb - 5th Feb.
'A damaged Earl and the woman who will risk scandal for love of him.'
Posted by Jen Yates at 22:15 No comments:

In simple numerology terms (simple cos I’m no numerologist) 2016 was a 9 year—2+0+1+6=9—therefore a year of endings and completions. This was certainly borne out by the number of doyens of the entertainment world who chose 2016 as the last year of this physical incarnation.

And yet, because of who they were and what they achieved in this lifetime, they left us a rich legacy, a huge part of themselves we can continue to enjoy and appreciate. In music, video, films, and books their energy, their presence, is still very real.

As I read the heartfelt rants on FB at each new passing (right up to the last one, Debbie Reynolds, who I will always remember in ‘Tammy’) I wanted to say, ‘Don’t begrudge them their right to move on to the next phase of their soul’s journey, just like ordinary people who have less fame and even less recorded art by which they will be remembered.’

I give thanks for all that transpired in my life through the last nine year cycle—including the births of 9 great grandchildren; the last on December 28th—and I embrace the next phase with joy, excitement and gratitude.

That last 9 year cycle was a time of defining myself as an author; finally discovering who I am and what I really love writing. Looking at my writing in 9 year episodes is quite enlightening. In the previous cycle, 1999 – 2007 I planned out 6 historical stories based on a belief in reincarnation and the effect of our past lives on our present, and completed 2 of them.

This morning I listened to a webinar by Andrrea Hess in which she talked of accessing our past lives through the Akashic Records, to look for actions/decisions/vows we made in those other lifetimes which are subconsciously affecting the decisions and choices we make in this one. It’s as if, way back then, we clicked a box in ‘Settings’ on our soul’s Facebook page, and our Soul continues to respond in the same way in similar situations until we go back into ‘Settings’ and un-click that box!

(If you want to know more about that I suggest you go to http://www.soulrealignment.com/ )

This webinar reminded me of those two books I wrote between 1999 and 2007. 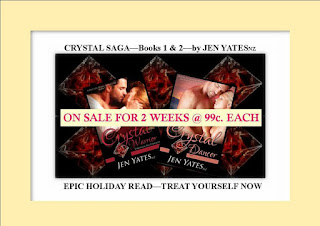 In Crystal Warrior, Book.1. of the ‘Crystal Series’ ( http://www.amazon.com/dp/B0197OZPW2 ) Torr and Jenna’s previous life many millennia before during the last days of Atlantis left him with a burning question and a deep distrust. Trouble was Torr had no idea why he distrusted Jenna; he just knew she was his; they were meant to be together.

‘What did you do with Ugo? That’s what’s been gnawing at my soul for millennia! You were not only leaving me to die on my own, you only had Electra with you. Where—was—my son?’

Not until he was able to articulate that question and understand her last actions in that ancient lifetime could they fully express who they were in this lifetime and what that meant to them now. It opened the doors to healing.

Book.2. Crystal Dancer, ( http://www.amazon.com/dp/B019A86LHS ) is Ugo’s story. He survived the destruction of Atlantis by being transported 6000 years forward in time, to Egypt just before the Great Flood. In their 21st century life, Hugo and Riki fall in love, but even though their relationship is long distance and the sex, when they do meet up, is hot and steamy but never penetrative, neither of them can break away from the need for one another. It’s not until Riki uncovers the vow she made at the end of that ancient lifetime, and reverses it, that they realize her problem was way deeper seated than the brutal rape she experienced as a 12-year-old girl in her current lifetime.

These 2 stories are big books, sexy books. They may test your belief systems and stretch your imagination. They were all-consuming to write and I think they just may have been accessed through my Akashic Records. It certainly felt like I’d been there, in those very distant, mythical times.

To mark the passing of another whole 9-year cycle, I’m dropping the price of these two books to 99 cents each for a couple of weeks – from $3.99. Click on the links above.

I now write sexy romances set in the regency era of England. I don’t call them ‘regencies’ because they have a bit more of a sexy edge than one expects in a ‘regency romance’. Nor do I call them historicals as I’m not a historian, but a writer of romantic fiction. So I'll occasionally take ‘historical license’, or liberties with historical fact, and use an element not strictly historically correct—all in the interests of telling an engaging story.

Book 1 in the ‘Lords of the Matrix Club’ series, ‘The Earl of Windermere Takes a Wife’ (http://www.amazon.com/dp/B01ENSMA2A) is available at this link.
Book 2, ‘The Perfect Duchess’ will be published very shortly.
Book.3. ‘The Virgin Widow’, is well under way also.

After posting this blog my next task is to finish a short ‘epilogue’ to the series that will be entitled something like ‘What Was the Matrix Club, Grandfather?’. (At least, that’s what I’m calling it at the moment.) It has been difficult to write, only because it has been rather emotional!

A writer spends so much time with their characters they become real people. Almost 50 years on from the original stories the four Lords are now all in their 80s, in varied states of decrepitude and all widowed—and have something like 80 descendants between them.

This short novella I will send as a free pdf to anyone who signs up for my newsletter.
Don’t panic! If my newsletters are anything like my blog you might get a couple a year! I will only contact you to let you know when I have a new book out, or I am doing any sort of a promotion.

Thank you so much if you have hung in there and read to here! If you want to be on my email list just send an email to : jenyatesnz@mail.com