It's Christmas morning in Piopio. But some things have to go on just like any other day. So a little before seven - to beat the heat of the sun already well above the horizon - I set out for my daily walk round the village. Piopio is a small blip roughly halfway on State Highway 3 between Hamilton and New Plymouth. Usually the road is busy with trucks and passing traffic.
This morning it was eerily quiet. Wondrously peaceful after the non-stop lines of cars, motorhomes, caravans, boats etc heading off for their summer holidays.

A lone motorbike came over the rise in the centre of town, one of those small ones that sound a bit like a lawnmower. He was zipping along as if in a hurry and with a purpose. Then I noticed he was dressed all in red, including the red hat and flowing white cottonwool beard! I thought perhaps he was on a mission to some local house but he carried on through, revving it up and that beard taking a beating from the wind!
He must have been running awfully late for his last delivery and had to abandon the reindeer - unless they'd gone on strike come sun up!
Hope he made it in time before the kids woke in a panic because Santa hadn't been!
I also hope he made it safely, though I have less hope for that cottonwool beard!
He was past before I thought to take a photo. Quite made my morning.
One of those images that stay in your mind.
Like the day I was driving back from Te Pahu on Boxing Day and passed a chap all decked out in a Tyrolean outfit and riding a penny-farthing bicycle!
I didn't get a photo of that either!
Hope you all have a great Christmas.
Posted by Jen Yates at 11:45 1 comment: 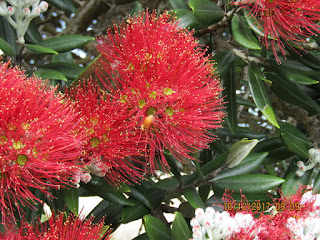 Coromandel is ever on my mind this time of the year. The Pohutukawa will be in bloom - which is about the only thing about Christmas that excites me.
(Yes, I'm one of those annoying people who are always muttering, 'What! We've only just done Xmas!' )
As you will know from other posts, I dream of being 'up the Peninsula' when the trees are in full bloom, which is pretty much right at Christmas. Usually we go around New Year which is already too late.
This year I had an opportunity to go earlier, though as it turns out, probably too early! But the magic was happening just the same.
I spent a couple of nights in Thames and on Sunday morning about 9am Jaci and I set off for Coromandel with our cameras, a journey of 54km which should take about an hour. 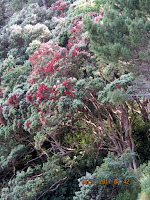 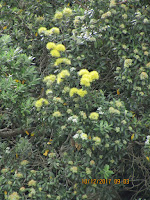 It took us four hours! And though my dream of seeing whole hillsides aflame with colour didn't actually eventuate it was spiritually refreshing just the same. There were drifts of colour like paint splashes across the masses of dark green foliage and for the first time, I noticed several of the yellow flowering variety growing naturally up the hills. They are not so spectacular, but beautiful nevertheless. 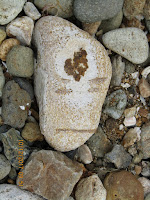 A ramble on the stony treasure beach at Waiomu was rewarding as always. You can often find crystal points and even the odd Maori artefact among the rocks which rumble down from the hills. But our most significant find this time was this face on a rock. At a glance it looks as if someone has painted or carved the features on it, but in fact they are intrinsic to the rock. 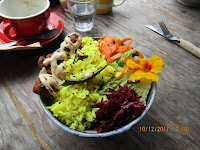 No trip to Coromandel is complete without a nosh and coffee at Driving Creek cafe. I think it's had a change of ownership this year but it's still vegetarian and still has a natural wilderness feel about it. This bowl of Kaffir Lime rice with pickled beetroot, carrot and apple salad, lettuce and falafel dressed with a nasturtium flower was almost too pretty to eat. It was as delicious as it looked.

Am home again now, feeling renewed and ready to write the last chapters of 'Her Dark Lord', Book 4 in the 'Lords of the Matrix Club' series. I need to get into it if I'm to reach my goal to have the first draft completed by Christmas! 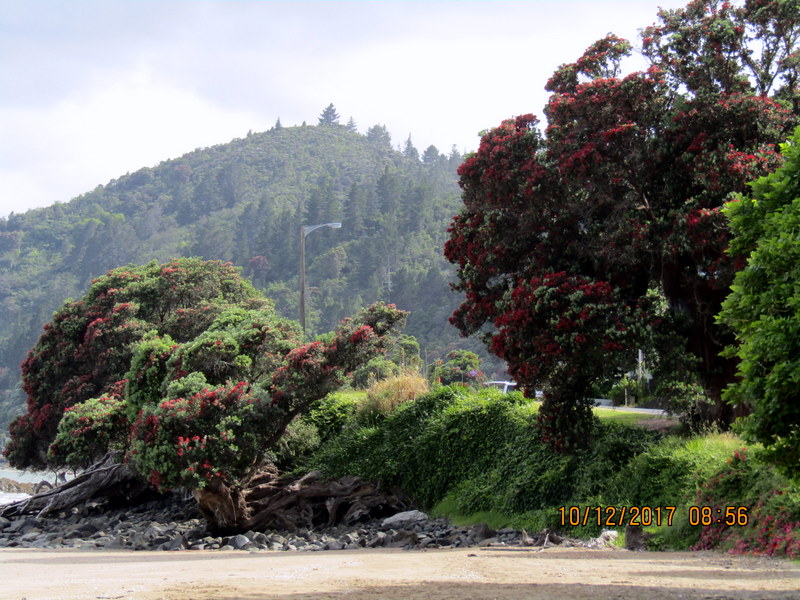