Voice Typing for Technophobes! / For 'Phobes not 'Savvies!

If you are a Techno-savvy person of the computer age you might want to skip this blog! It's for the 'Phobes, those of us who flounder about in the dark most of the time until something MOMENTOUS happens and we find a light switch!!! Each such event is quite stupendous, which I imagine would only make the 'Savvies shake their heads in wonderment.
However, if you belong to the 'Phobe brigade - follow me - to a light switch!

Caroline, my critique partner and I, discovered something MOMENTOUS yesterday! Her teenage son had been doing something on her phone and went into Google Docs and was voice typing. So Caroline began wondering if we could find it on our computers!! OMG! Go to the Google Icon that you go to for Google Maps >.>.>.>.>....

Scroll down  to the 'Docs' icon. You might need to go down into 'More' to find it.
We thought you had to buy a special programme to do this!

I have now dragged that icon to the top of the list right by Google Maps!!!
Open a blank page ( no doubt you can do it with other stuff on there but this is easiest).
Go to Tools on the Tool Bar and scroll down to 'Voice typing'.

A black microphone appears on left of screen. Click on it to turn it red and start talking! Speak clearly.
I haven't done a lot with it yet but you can tell it 'full stop' ,  'new line' etc and no doubt I will discover how to do all punctuation. !

Now I can READ my handwritten stuff to the computer instead of having to type it all!
THEN, go to File, scroll down to 'Download as',   to save it as 'Microsoft .docx' !!!! You can also Share it via email!
I write most of my first drafts by hand and I'm hopping with excitement!

It recognized my voice right off. I didn't have to train it! Though one does need to speak a little slower than normal, and clearly. It doesn't recognize some words and will substitute others.  Regular usage might help here - I'm hoping. But one just needs to read through and edit later!

Having a play with it just before going to bed, I discovered it is also predictive! Or, in the scary way of computers, more switched on to my way of writing than I like to think about!
I said, 'The Earl of Windermere never ...set foot...'
While I was trying to think what else I might say, the computer wrote, 'The Earl of Windermere never...had sex...with you...'
Just as well really, because his problem would probably have earned him a biff round the ears from me!!! Jassie, on the other hand, loved the damned man, unconditionally!

'The Earl of Windermere Takes a Wife' is now available in print as well as ebook.
Go here for the ebook:- amazon.com/dp/B01ENSMA2A
Go here for the print version:- goo.gl/zxRmpH

Controversial Sexy Regency. Love him/hate him, the Earl stirs you. Is Jassies love strong enough?
Posted by Jen Yates at 17:26 No comments:

Research Should be such Fun!

I came across an amusing Tweet about research on Twitter a few days ago which, judging by the number of likes and retweets, struck a chord with many.
It made me smile and think about the fun one has and the interesting and useless facts one might learn which bear no relevance to the topic being researched.

Here's the Tweet From @MeredithIreland:- 'Researching for a book is like going to Target. It starts with laser precision and then an hour later you're looking at cat beds and you don't have a cat'

However, sometimes research can be just plain fun. I am writing a novella, which I plan to publish 'permafree' on Amazon. It involves pirates/smugglers and sailing ships.

Never having been on a sailing ship (can't even recall that I've been on a yacht) I was concerned about my ability to invoke the true atmosphere of such a vessel. It had not actually occurred to me that I could do something about this lack of experience (beyond googling my way happily through the Cyber-Target of the Internet) until my husband was researching things to do up north for our recent short holiday.
He rather fancied a day out on the R. Tucker Thompson, a replica schooner sailing out of Russell in the Bay of Islands. 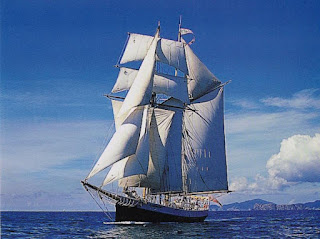 The tourist day trips fund the youth development program run by the Trust that operates the ship.
And here's a shot of the R. Tucker Thompson in full sail, taken from a postcard.
We had a beautiful day for our trip but we never got the topsails up. Nevertheless, it was a glorious experience. I also was able to check out the elegant woodwork and very close confines below deck. I wasn't keen to try sleeping in a bunk. There was definitely no room to sit up. But I was impressed with the compact arrangement of everything.
(Apologies for my inability to arrange these photos any better. They were not particularly cooperative!)

Do you enjoy old books? I have a copy of 'HAYDN'S DICTIONARY OF DATES' by B. VINCENT c.1863 and find it endlessly fascinating. Dictionaries and those kind of old books are my favourite.
I just want to share a few entries with you.

The history behind some mundane items is kind of mind-bending! 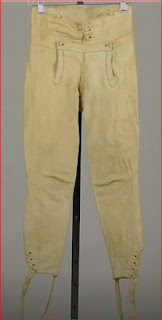 BREECHES. Among the Greeks, this garment indicated slavery. It was worn by the Dacians, Parthians and other northern nations; and in Italy it is said, was worn in the time of Augustus Caesar. in the reign of Honorius, about A.D. 394, the "braccarii or breeches-makers were expelled from Rome; but soon afterwards the use of breeches was adopted in other countries, and at length became general."
Hmm, could it be too many women were beginning to 'wear the breeches'? The Regency era leather breeches at right I have saved to a board on Pinterest.

"BUTTONS, an early manufacture in England; those covered with cloth were prohibited by a statute, thereby to encourage the manufacture of metal buttons, 8Geo, I. 1721. They are now made of glass, porcelain etc.."

Imagine - a law against cloth-covered buttons!

And cabbages have always been around - right? No!

"CABBAGES. Three varieties were brought to these realms (presumably England) from Holland, A.D. 1510. To sir Arthur Ashley of Dorset the first planting them in England is ascribed. This vegetable was previously imported from the continent. It was introduced into Scotland by the soldiers of Cromwell's army. "

Even the way we speak and write has changed so much that the phrasing often appears quaint or amusing, as in the following.

"CALLAO (Peru). Here, after an earthquake, the sea retired from the shore, and returned in mountainous waves , which destroyed the city, A.D. 1687. The same phenomenon took place, Oct. 28, 1746, when all the inhabitants perished, with the exception of one man, who was standing on an eminence, and to whose succour a wave providentially threw a boat." 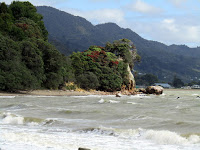 Quite explicit! You can see it happening...

Enough trivia for the night!
Posted by Jen Yates at 02:13 No comments: