I have finally written the end of  'Her Dark Lord' the last of the 4 books in the 'Lords of the Matrix Club' series. I have to admit to a little difficulty letting the characters go, always a problem at the end of a series. One becomes attached!
I'm loving the cover, another http://www.romancenovelcovers.com/ masterpiece with Jimmy Thomas as the male model.
It's available for Pre-order now with a release date of 28 March which gives me time to get feedback from my beta readers and to implement any edits necessary.

Here is the Amazon link:
www.amzn.com/dp/B079C4NGJ6 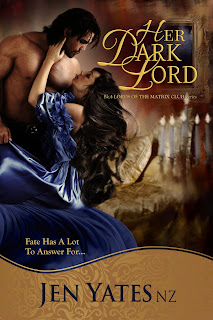 Only Fate would play a jaded, emotional cripple like Knight against a feisty, independent woman like Penny, a new widow someone wants dead.

Here's a couple of snippets:-
'Knight found himself imagining the stunning beauty that would emerge if she were bathed, pampered and dressed in silk and satin—more specifically undressed—and bound in silk and satin.
He was bellows to mend and yet parts of him were very alive indeed.'

'The mahogany brows formed a straight line across his forehead and the dark eyes scorched down her body, missing no detail in their heated scrutiny.
Penny played him in kind, allowing her critical gaze to assess the manly proportions of shoulders encased in perfectly tailored dark blue superfine, unbuttoned to expose a shirt of linen so fine it barely disguised the outline of taut muscle beneath. Dropping her gaze still further, she lingered a moment on the snug fit of buckskin pantaloons over bulging thigh muscles and the hard evidence of his arousal.
Telling herself the flash of heat through her body was a measure of her ire, she returned her gaze to his, determined to appear disinterested, cynical even. No way would she allow him to know seeing him thus, seeing any man in a state of arousal focused on her, was one of her deepest fears.'

Watch for my next series 'Ladies in Buckskins'.

It's also 4 books. I'm certain there would've been as many women 'bucking' the system 200 years ago as there are now. Human nature doesn't change. These ladies would relate well to Knight's feisty Nemesis, Lady Penelope Grantwood.

If you wish to join my email list to receive notification of when my next book is due out please email me at jenyatesnz@mail.com. You will receive a free short sequel to the 'Lords' series and a short prequel as soon as I have finished it!
Posted by Jen YatesNZ at 18:48 No comments: