On the Trail of Mountains

A frosty morning heralded a glorious day for Pete's last day off between shifts and since the power was going to be turned off most of the day for the replacement of a power pole, we decided to head out for brunch and a day of relaxation. Where should we go? Pete suggested the restaurant, 'Out in the Styx' near Maungatautari Mountain. We'd only been there once several years ago. He set the GPS on his phone for Maungatautari , and off we went, zigzagging across the Waikato on lesser used roads, some completely new to us. In our minds we were heading for Pukeatua, which we vaguely remembered was where the restaurant was situated - to the south of the mountain. 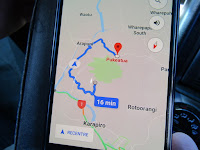 We are house-sitting for my sister and her husband at a beautiful spot just north of Pirongia Mountain so we were cruising through the verdant Waikato with its lush dairy farms and horse studs. The land was soaking up the sunshine after weeks of rain. As were we! The very nice lady on the GPS was ever so helpful turning us this way and that - through Karapiro and onto Maungatautari Road, which took us up onto the flank of the mountain.
There the road ended and a walking track started. Mountain walking is way off my radar these days! This was not where we'd thought we'd end up. Wasn't that restaurant at or near Pukeatua? Another look at the map and we turned the GPS off and followed our noses in the good old-fashioned way, on around the mountain, through Arapuni and to Pukeatua on the south side.
We found 'Out in the Styx',more of a guest house with restaurant operating only by reservation.  https://styx.co.nz/
Stymied in our intention to brunch there we decided to head for Cambridge where we knew we'd find something open! At the very least 'Fran's Cafe' where the custard squares are to die for! For brunch?
Well - one of us would eat them whenever!
But stomachs were put on hold to go and check out the visitor centre for the wildlife sanctuary that has been constructed on the mountain. A 47km fence (the longest multi-species pest-proof fence in the world) encloses the bushclad peak of the mountain providing sanctuary for endangered native birds and the tuatara. Before Europeans came to New Zealand the land was mammal free. This fence is creating a small piece of New Zealand as it was before European colonisation.

TeAra, The Encyclopedia of Nz states:
Maungatautari can be translated as ‘suspended mountain’. It is said that the name was given by Tainui tohunga Rakataura, who first saw the mountain rising above the fog that often blankets Waikato.

The view to the south and to the west across the Waikato from the visitor centre was inspiring! From mighty Ruapehu to cheeky little Kakepuku. What is it about mountains? I feel such an affinity for them and whenever I find myself on the plains there is this need to head for higher ground - or at least to where I can see it! I guess it goes back to primitive instincts for safety. If you hold the higher ground you definitely have the advantage!
A very satisfactory day, completely circumnavigating Maungatautari mountain and connecting with several others on the journey.
And we did get fed - extremely well - at the Lily Pad Cafe on Kaipaki Road - at about 1.30pm. And Pete did get his custard square! Best of all I didn't need to cook dinner when we got home. Neither of us needed it. Oh, and the power was back on.
No further excuse for skiving off. All things electrical are operational, including the computer.
Back to work.