It felt like the first day of Spring, warm and sunny after a frost. A glorious day to play hooky.  So between getting a windscreen chip fixed on 'Blue Thunder' (Mazda 2 - LoL) and doing the weekly grocery shop, DB and I decided to drive out to Waitomo for lunch at Huhu Restaurant. It's named for the huhu grub, a Maori delicacy not actually available on the menu. Apparently, roasted they taste like peanut butter. Here are photos of a grub and a beetle I borrowed from the Internet. 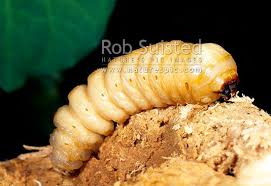 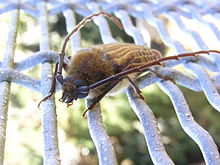 DB has an issue with taking photos of food but he managed to smile (weakly) while I photographed what I did order from the menu - Beetroot & Orange Cured Ora King Salmon, Celeriac & Sour Cream Salad, Beetroot Relish.
An excellent choice. 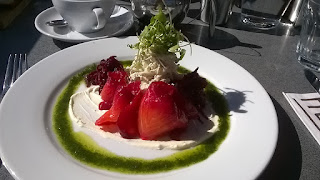 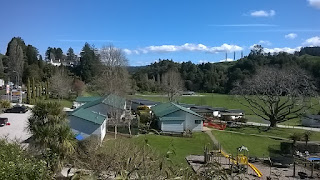 We dined out on the deck where we could soak up the sunshine and the view of the Waitomo Valley with the iconic Caves Hotel on the far ridge. One of NZ's major tourist attractions, the Valley was still delightfully peaceful - and rural.

The grocery shopping was so much less mundane thereafter!
Posted by Jen Yates at 14:02 5 comments:

I met a woman recently who is writing a Psychological Self-help book. For a while I allowed myself to be blinded by the worthiness of such an intellectual endeavour. I write Sexy Romance set in the Regency era and it seemed frivolous by comparison.
I have just returned from Romance Writers of NZ Conference 2017 where the keynote speaker, Christie Craig (aka C.C.Hunter) reminded us that no matter who you are, rich or poor, lord or peasant, man or woman, president or criminal, when you are on your deathbed the only thing that will matter is love; those you love and who love you.
Romance novels are an endless source of love and relationship Self-help. Men can learn how women think and what they want. Women can learn the same of men. You can study the interaction of different personalities; how to compromise, and what love really means.
Romance novels are also a source of hope and inspiration. Stressed? Read a good romance and see if you don't feel better and more empowered when it comes to that satisfactory conclusion.
Sexy romance novels are an entertaining and natural way to learn about sexual technique - within a loving relationship.
My characters often seem to have sexual issues to overcome and since a romance novel must come to a happy and satisfactory conclusion, these issues must be resolved by the end of the book. Therefore, reading the books may help people with similar issues in their own lives; give them hope.
I do believe I write 'Psychological Self-help books.'
In an entertaining way!

Bk.4. is under way. The working title is 'The Dark Lord', but this may change during the writing.
'The Perfect Duchess' started out as 'Marked for the Duke', but the true title became obvious by about the 4th time Lady Sherida's 'perfect duchess' potential was mentioned.
Bk.4. is Knight's story, Lord Ajax Beresford, Earl of Knightsborough.

Bk.4. is proving to be quite different. I'm seeing the scenes, one at a time (usually while I'm in the shower! Wish we had solar hot water!) and I find myself writing them in full before I can move onto the next. Why aren't the scenes just as obvious as they were in Bk.3?

Then I realised that perhaps the characters themselves have something to do with that. The Virgin Widow, Lady Jane Rotherby, is a delightful 'Lady of the Manor' style character with an embarrassing secret. It's the only subterfuge about her. As for the Great Bax, it was no secret what he wanted - from the moment he set eyes on 'Angular Jane' again for the first time in 15 years. They were open, fun-loving characters who both desperately wanted to get hot and steamy with each other.
They were uncomplicated.  Jane's virginity was the main sticking point, though Bax had some life-changing family secrets to discover.

Lord Knightsborough, on the other hand, is a deep, dark character who is all about keeping control of his emotions and not letting any woman emotionally close, while Lady Penelope Grantwood is a feisty, fiercely independent woman, determined that no man shall control her ever again! Knight, in particular, gives little away. He likes his women submissive and willing to be bound so they cannot touch him or compromise his control in any way.

But she stirs him as no woman has in a long time, maybe ever. There is not a submissive bone in Lady Penny's body - and she's very handy with a gun!
These two are revealing their story in a very different way to previous ones, and I'm finding it intriguing. Hopefully, readers will find it so,  as well.