Of Bolts and Things...

Not sure where this will go but these damn bolts have niggled at me ever since I saw them on my morning walk a week or so ago.
It was so ordinary, just four random bolts in the gutter. And yet it wasn't ordinary at all. 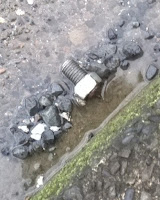 I take the same route around our village every morning and I hadn't seen any bolts in the gutters until that day - when I saw four. They were at random points along my walk and by the third one, I doubled back to take a photo. I would pass the others again on my way back home.
The postie passed as I was taking one photo. Wonder what she was thinking, as I was stooped down taking a shot of the gutter?
The 1st had no thread. The 2nd was shiny and new. The 3rd was a bit rusted but still had yellow paint on it. The last was just the shiny, silver flat head with the shank shorn completely off. The photo of that one is a bit odd because I was conscious of the postie approaching! 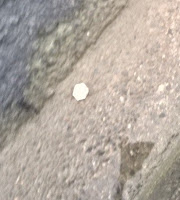 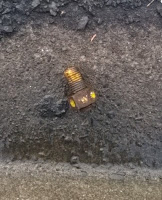 What was their story? Why was I suddenly seeing them? Could they have a meaning?  'A screw loose' comes to mind, and the postie would likely agree! But they're not strictly screws. Not 'nuts' because there weren't any! Maybe they were just telling me to walk faster, 'bolt' for it!
And then I fell to wondering what drama befell someone that day - or maybe even several days later - because that bolt chose to stop doing its job and fall into the gutter? Humans are wired for story and I can't help wondering what the story of each bolt is. How? Why? When? What happened next?
Since I can't seem to make a romance out of it, let alone a historical one, I can only hope I have now written them out of my mind! In fact, I hope they've 'bolted'!