The Birds Told Me...

Am feeling very grateful for my life.
I have just had a week in writing paradise, a lovely holiday home among the bush, above Lake Taupo, at Pukawa. The only sounds were the birds and the breeze. A single beautiful flax was blooming just off the deck and tui came to visit it several times a day. Tui are nectar eaters and they start at the top flowers and systematically dip into every blossom on the way down the stalk. 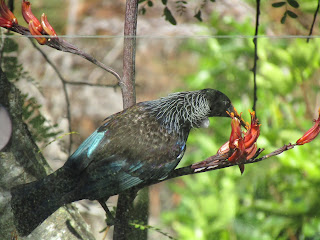 Their magical song made up of ringing bell-like tones and deep 'churr' noises can be heard above the bush all day long.
They are also quite territorial, and noisy about it! 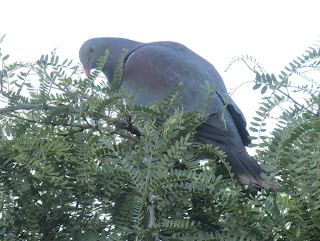 A kowhai tree grew a little further back which attracted a big fat kereru (wood pigeon) to munch on the green foliage. He only visited once but I was able to capture the moment.
Kereru are as large as a small hen and look rather incongruous perched in the delicate branches of the kowhai, but they seem to manage without mishap.

One afternoon while writing at the table on the deck, an odd sound caught my attention and I turned to see a pair of quail come out onto the small patch of lawn. I grabbed my camera and began videoing. Suddenly there appeared what I thought was a small flock of sparrows about their feet. It took me a minute to realise that it was baby quail, looking like bumblebees on stilts! There must have been a dozen at least. Unfortunately, the video is on it's side and I don't know how to turn it round and  I didn't get a still shot of them. So - a sideways video of the quail!
That same afternoon a bird that I didn't recognise visited the birdbath. And I will share another sideways video of it, hoping someone might know what it is. It was a little bit smaller than the tui and had a solid white ring about its neck.

Strangely enough, I did get quite a bit of writing done while I was there!
And the final morning Mother Nature gave us a glorious farewell.