Writing ‘The Earl of Windermere Takes a Wife’.

I'm discounting this book for a short time so thought it an opportunity to talk a little about the writing of it.
The first in the 'Lords of the Matrix Club' series, it was a challenge to write.
Windermere had loved Miss Jassinda Carlisle since childhood. But being eleven years older he'd had to wait for her to grow up. During his years at university, he became involved with a deviant professor's wife who sexually abused him and left him with deep psychological scars as a result. By the time Jassie was sixteen and determined on her first kiss from the man she'd loved all her life and was going to marry the moment she might, he knew he would never be any woman's husband.
So began years of pain, years in which he tried to stay away, but couldn't. Years in which she waited and hoped, not really understanding. Jassie was twenty-five when she took matters into her own hands and forced Windermere into a situation where marriage was the only honorable option. 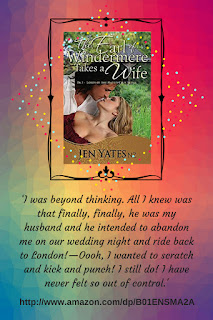 He determined he would not be a proper husband to her and risk damaging her also. Jassie was more determined their marriage would be totally normal.
She promised him her love was unconditional.
Even so, Windermere needed help and there were no psychologists in the Regency era. What then? Who could one approach about such a private, sensitive and sordid matter? Who would know most about deviant sexual needs and problems? My decision was a brothel madam which led to some interesting intervention.
I loved that I was able to gain Windermere a normal marriage and a normal life with the woman of his heart, and that Jassie had the stamina to take the journey with him.
If you want to know more, take your chance to acquire your copy while it's discounted to the bargain price of just 99c. Here's the link.
https://tinyurl.com/yaoajasz