A blog to my granddaughter.

In response to this question from my Grand-daughter on FB:-

Shayla E. Mc Nananana Jenny, question! Do you have a favorite book of all time? Or something you have read so profound it drove you to write? Xx
Dearest Shay!
My answer to that was way too long for FB so I decided to blog my answer.
Once upon a time - quite a long time ago! - when I was probably JUST old enough to start reading the books on my mother's bookshelf - I found

"Paddy the Next Best Thing" by Gertrude Page. It had a plain blue cloth cover like most books did back then. It had probably had a dust cover when it was new, but that was way before I found it. I'm pretty certain the spine was broken by then. So I'm guessing it was written early in 1900s.
It's a delightful Irish romance. Red-headed tomboy, Paddy, and her beautiful dreamy sister, Eileen, live next door to the parsonage at Omeath and the parson's son, the gorgeous rapscallion, Jack O'Hara.
Paddy & Jack are the greatest mates, getting into all sorts of scrapes together and Paddy of course just knows they will grow up and marry. Trouble is, Jack falls for Eileen. But this is Paddy's story and she does get her HEA, just least where she expected it.
But the charm of this story for me was the humour and Gertrude Page's ability to create such vivid word pictures I have never forgotten them.
I could see the mountains and the loch and Paddy skimming over it in her yacht - and falling out. I could picture Patrick's pig shed where Jack and Paddy had gone to help him catch the piglets for market. Patrick's housekeeper, a very large woman called Dan'l, was to stand in the doorway to stop the little blighters escaping. But the mighty Dan'l was no match for a charge of piglets intent on escape and came down in an ignominious heap with one squealing piglet trapped beneath her.
In a way this story was a treatise on growing from the careless pleasures of youth which we tend to take for granted, to the emotional reality of adulthood and the painful lessons we sometimes have to learn along the way. It was full of love and fun, of grief and pain, of staggering and picking oneself up and learning to live again. And love again.
Once I've read a book, I've read it and have no interest in re-reading it. But I couldn't tell you how many times I re-read that book. I would try to hide it because I knew it was an oddball kind of thing to do! Because, of course, Mum noticed - and commented. 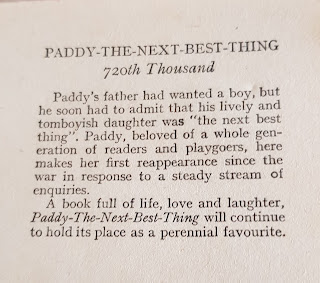 "Jennifer, you're not reading that book again, are you?"
Well - yes, I was. Many times. I made sure I inherited it and had it on my shelf so I could indulge whenever I fancied.
Then disaster struck in the form a house fire in 1981 in which we lost everything. There were many things I deeply regretted losing in that fire - but of course, they were only things. We were all alive!
But one loss I could never reconcile with was 'Paddy the Next Best Thing'.
I spent the next 20 years checking out every second-hand bookshop I came across, searching the shelves for an old blue covered book.
I found a lot, but never the one I was looking for.
I even considered writing the thing from memory, for I was pretty certain I could!
Then on a visit to Wanganui, I found a little shop where the old books were well laid out and I really can't remember whether I asked and yes they had it, or whether I just found it. I suspect it was the former because it was not the blue book I was looking for.
But there it was, re-issued in paperback! The 720th Thousand! And it had apparently been a Best-Seller!
Nothing could compare with how I felt in that moment. It was like a lost child had been restored to me! And I couldn't wait to get home to read it again.
And guess what? Now you've made me think about it, I will just have to read it - yet again!
So there you have it - and it's not even sexy! I guess it would not have been lurking on my mother's bookshelf if it had been!
But I would credit this book with starting my lifelong passion for reading and writing romance.
And if you want to check it out for yourself, it's now available free on Amazon.
https://www.amazon.com/Paddy-Next-Best-Thing-Gertrude-Page/dp/1499764715