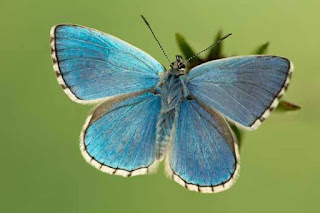 (The following has been copied from the Country File Magazine, (on line).

Large blue Phengaris arion
The British race of this magnificent royal blue butterfly was declared extinct in 1979. Since then, the Swedish race has been naturalised in the West Country by a dedicated team led by top butterfly scientist Prof Jeremy Thomas.
This race is now quite well established in the Polden Hills in mid Somerset, where several colonies result from natural spread. It is also being re-established in the Cotswolds and Devon.
It flies during June on sunny slopes where the grass is kept short, and visits wild thyme flowers. The larvae feed for a while on wild thyme before becoming predators of the grubs of a single species of warmth-loving red ant. The large blue lives for 10 months underground in the ant nests.
Where to see
Access is difficult at most sites, and most colonies are extremely small. The National Trust runs an open access site at Collard Hill, near Street, Somerset. This supports one of the largest known colonies in Europe.
******

Henry Davencourt would have been pleased to know his beloved butterflies are being cared for.
Here is excerpt #2 of Henry's story.

'Like a butterfly.'
‘A butterfly struggling on a pin, if you ask me,’ sniffed his oh so elegant mother.
He'd heard nothing else of the dinner table conversation between Mama and her companion, Cousin Eugenia. Nothing unusual in that. He rarely listened or bothered to try to slip in even a word. They never expected him to anyway.


But butterflies always got his attention. It was the very topic exercising his mind at the moment—where was the most likely place to acquire a perfect specimen of the rare large blue. He'd been working for years on a painting in which he hoped to showcase every species of British butterfly known to exist.
At his mother's next words he realized she was talking of a woman and almost ignored what came next, except she had captured him with that image of a beautiful creature struggling on a pin—a pin wielded by Uncle Charles, apparently.
‘She's the niece of his first wife, sent from France by her mother for a Season under the auspices of her uncle. What her mother was thinking, I can't imagine!’
‘Lady Wilhelmina will surely keep a wary eye on her husband?’ Eugenia said. ‘She must know how he is.’
‘Perhaps,’ his mother muttered, ‘but there's many a slip betwixt cup and lip, as the saying goes. Not a situation any young gel would like to find herself in, beholden to my scoundrel of a brother-in-law for the roof over her head, the food in her belly, and the clothes on her back—and having to tread carefully with that witch, Wilhelmina. The sooner she marries the better, I should think.’
‘With her looks it shouldn't take long,’ Eugenia opined.
‘Her coming-out ball is only a week away. No doubt there’ll be plenty of interest. Plenty to recommend her to those who don’t mind her lack of fortune.’
Henry went back to his eating and ruminations. He hadn’t thought to attend his uncle’s ball, but damn if his curiosity wasn’t piqued.
A butterfly to add to his collection…perhaps.